Drop in sessions for all seniors, or Junior members (sixth form age) or who play for the senior teams, run each week of the year:

Sessions are run on a turn up basis and therefore it is impossible to gauge how many will turn up. There is a difference in the court numbers allocated seasonally due to having two full time coaches that work evenings. The head coach has an astro court all year round at his disposal and his assistant has an astro on a Monday & Wednesday when it is impossible to use the tarmac courts due to the lack of light. He reverts back to Tarmac when the nights get lighter.

Each session follows the same format:

Used balls are available in the club-night box which can be found in a cupboard near the office, strictly 3 balls per court are permitted, this should help to prolong the life of the balls provided.

The committee reserves the right to cancel clubnight if the courts are required for other club purposes, this is very rare as the committee recognise the importance of the club roll up sessions but are also aware that demands on the courts is high due to the large membership. 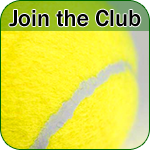